Digitization, which has burst into our lives, is rapidly rushing into a bright IT future by leaps and bounds. Modern man has already ceased to be a user of digital technologies, but has turned into their integral part - into a walking device for consumer electronics, programmed for certain actions in the information and communication process.

A vicious circle: a person is constantly trying to improve technologies in order to make his life easier, and technologies complicate his life due to the need for their constant improvement on the part of a person.

Who is smarter than anyone else in the world? Man has learned to create universal computers, multifunctional gadgets, high-tech devices, etc. They are so perfect and sophisticated that most of us, with the exception of rare specialists, in practice not only do not use their capabilities, but do not even suspect about them. Is man not worthy of his own creations?

A race without a finale: in our time, not individual companies and scientific institutions are trying to keep up with the violent tread of digitalization, but entire countries and even continents. However, catching up with the era of supernova technologies, which is running beyond the horizons of our comprehension, is hindered by the lack of fundamentally new personnel. As innovative as the era of digitalization itself that has fallen on our heads.

Therefore, a modern-minded manager looks closely at boys and girls, including adolescents. Because many of them live more in the virtual space than in the real world. There they, immersed in all sorts of algorithms, paradigms, compilers and platforms, can sit for hours staring at the monitors, as if in hypnotic meditation. And if IT specialists, waking up from digital immersion, begin to talk with each other, then it is impossible to understand their speech - they speak in a language unknown to us.

The paradox: they do not know the elementary multiplication table by memory, but at the same time they turn over huge arrays of software products, communicating with the computer, as already mentioned, in a non-human language with the help of axiomatic, denotational and, Allah knows what other semantics ...

This way of life of the younger generation seriously scares teachers and parents. What about these teenagers? What to do with them? How to bring them back to real life?

But the main thing is what is the future of digital Turkmenistan?

Practice has shown that the best way is to channel the digital chaos that has filled the heads of young people into the creative channel of social orders or the needs of the IT industry. And for this, holding various parties, such as thematic contests, forums, etc., is the best suited. 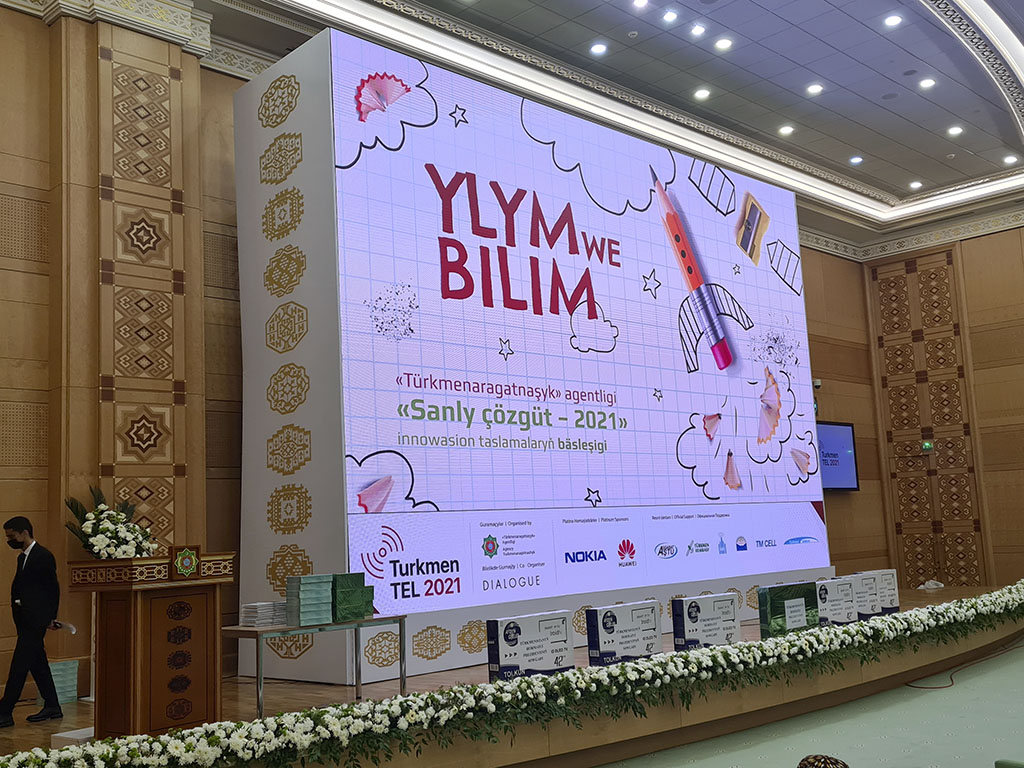 The other day, summing up the results of such a competition of intelligences took place within the framework of the Turkmentel-2021 conference. Young specialists, students and schoolchildren competed in seven nominations in the “Digital Solution-2021» competition held by the Turkmen Telecom agency. Their names speak for themselves: Robotics; Electronic industry; Science-education; Health care; Transport and logistics; Agriculture; Services sector. 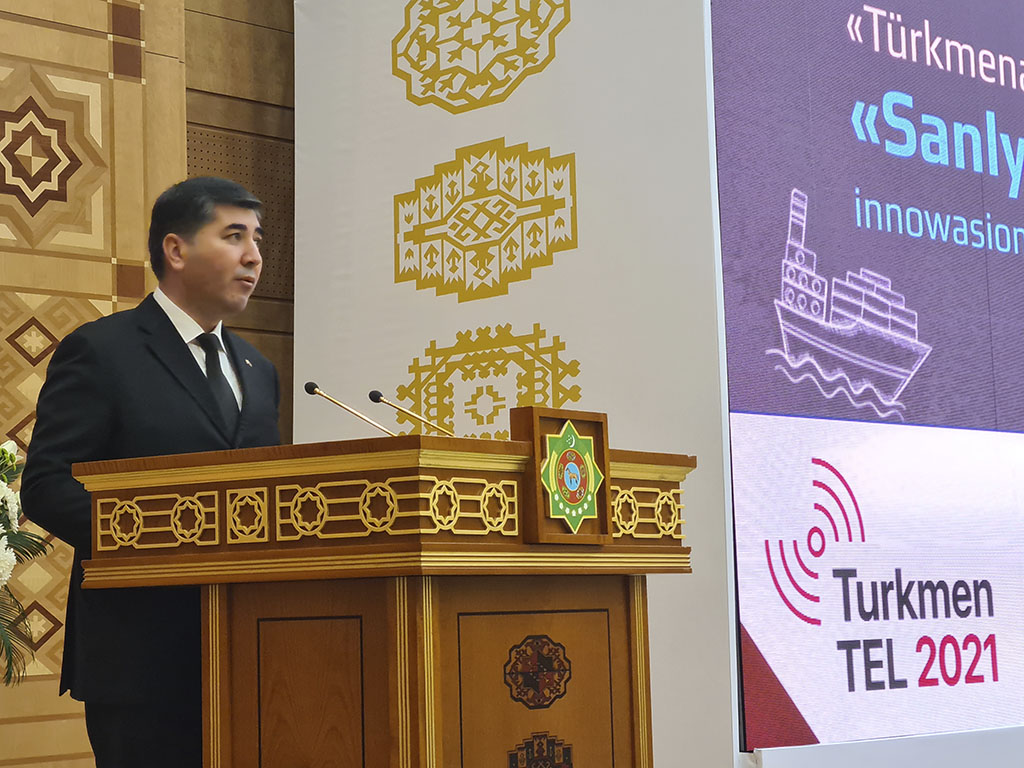 Those who conduct such competitions are well aware that these are the areas in which the implementation of breakthrough solutions will significantly improve the life of each person and society as a whole, and the state will form an innovative management system to increase the effectiveness of economic processes.

One of the organizers of the mentioned intellectual competition, Pena Sukhanberdyev, says:

– If last year 104 people took part in the competition for innovative projects, then this year there were already 265 - that is, their number increased more than two and a half times. But this is not the main thing, although quantitative growth is also an important indicator of the growing interest of young people in IT development. It is valuable that the level of professionalism of the authors of the projects has noticeably increased ... 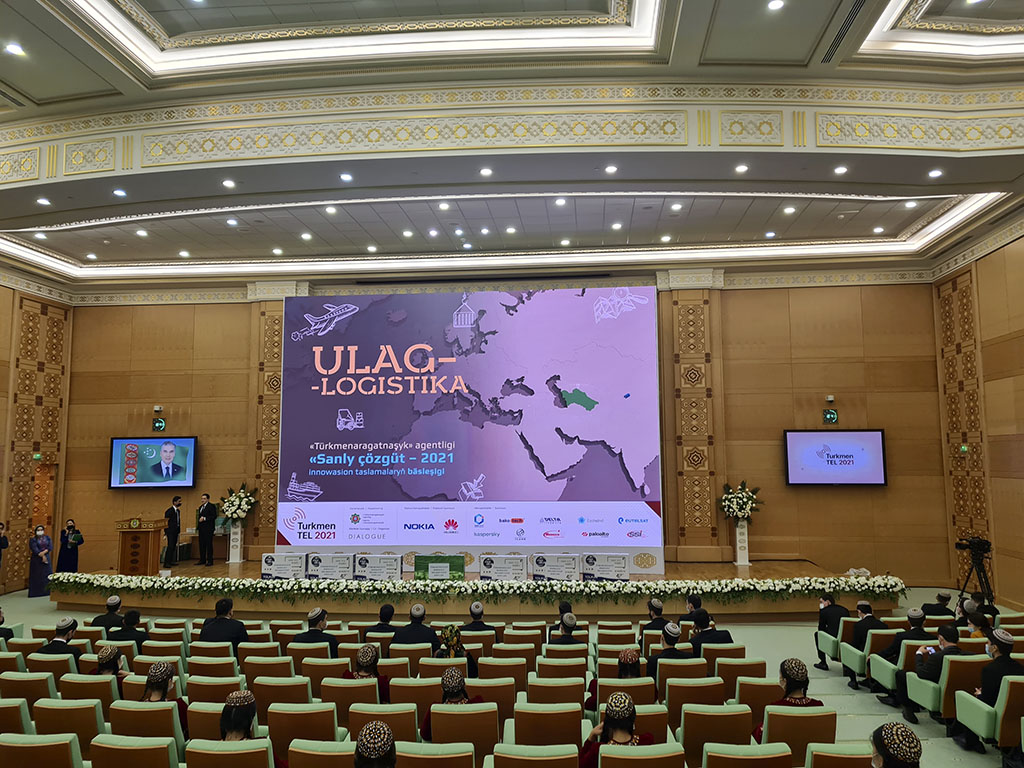 Recall that the competition was held among young professionals, students and schoolchildren, as well as among freelancers (from the English "freelancer" - "free worker").

Let's turn to statistics. In each of the seven nominations it was determined: one first place; two - the second; and three-third. There are 42 winners in total, including all categories of participants in the “Digital Solution 2021” competition - young professionals and students representing scientific and educational institutions, as well as schoolchildren and the above-mentioned freelancers.

In the unofficial standings of the winning institutions, the absolute leadership is behind the Oguz Khan Engineering and Technological University - among those who won prizes in various nominations, almost every third was a representative of this young university. 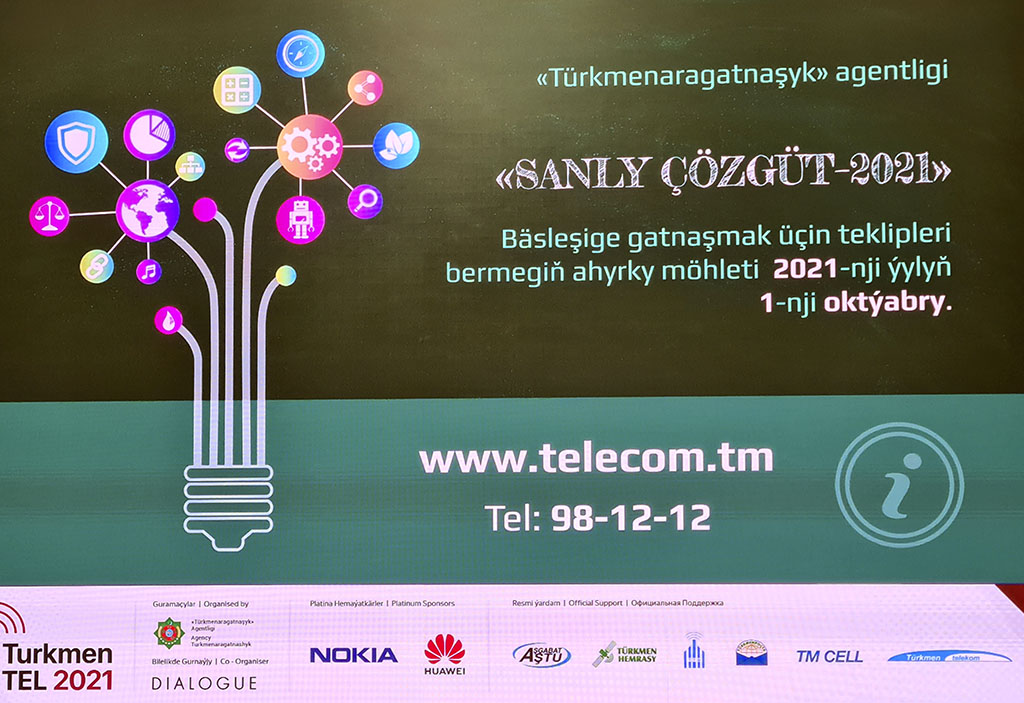 In general, the Oguzkhanovites took the first two places, five - the second and eight - the third. Which is understandable, since, despite its youth, this "forge" of Turkmen technologists and IT specialists managed to earn a high prestige for itself.

The second on the list of winning institutions are specialists and students of the Institute of Telecommunications and Informatics. Of their six best projects, one took the second place and five-third.

The future defenders of the Motherland, teachers and students of two institutes of the Ministry of Defense - the Military and the Naval ones, lost a little to the future signalmen. Their intellectual arsenal has one second and four third places. 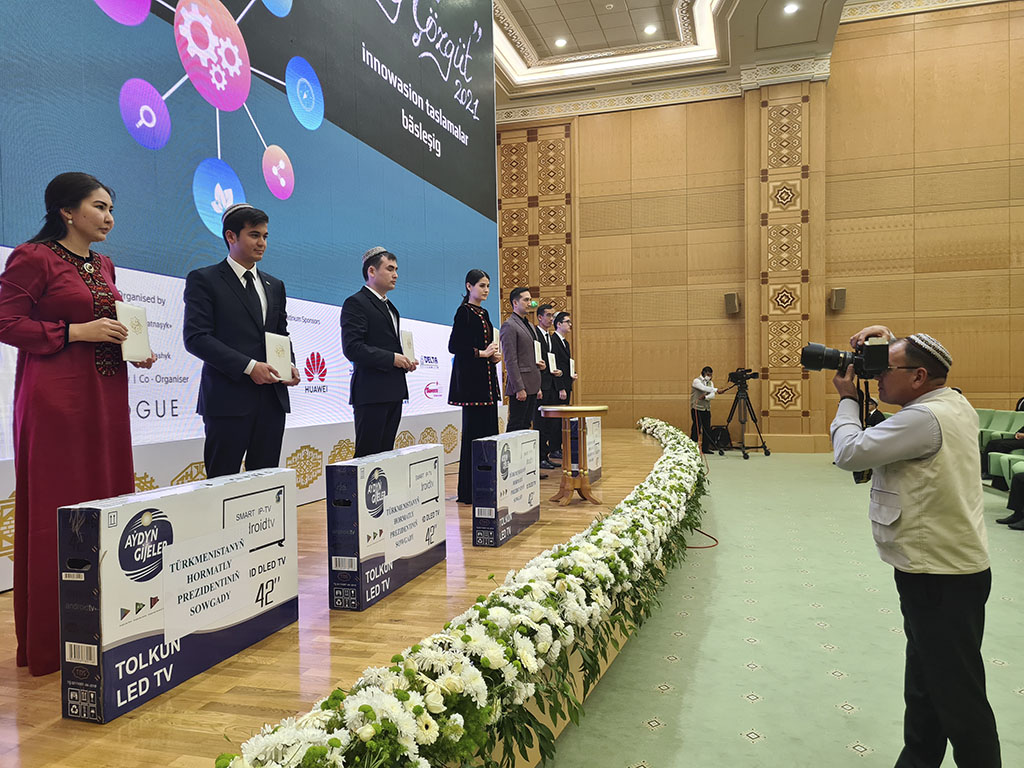 Freelancers also showed themselves well - out of five “free workers” who took part in the “Digital Solutions-2021” competition, two took first places in the “Electronic Industry” and “Transport-Logistics” nominations.

Also, two projects presented by a teacher and student of the International University for the Humanities and Development, took first places in the nominations "Healthcare" and "Science-Education".

Two more projects from the Turkmen State Institute of Economics and Management took second place in the nominations "Agriculture" and "Services".

The rest of the institutions took one prize. Among them, I would single out two participants: the only representative of the private sector of the Turkmen economy, Ismail Khyakimov from the Gala-Arslan farm, who took second place in the Robotics nomination, and the only winner from among schoolchildren, a student of the secondary special school No. 28 of the city of Ashgabat Ilyas Yylkybayev, who took first place in the "Service Industry" nomination. 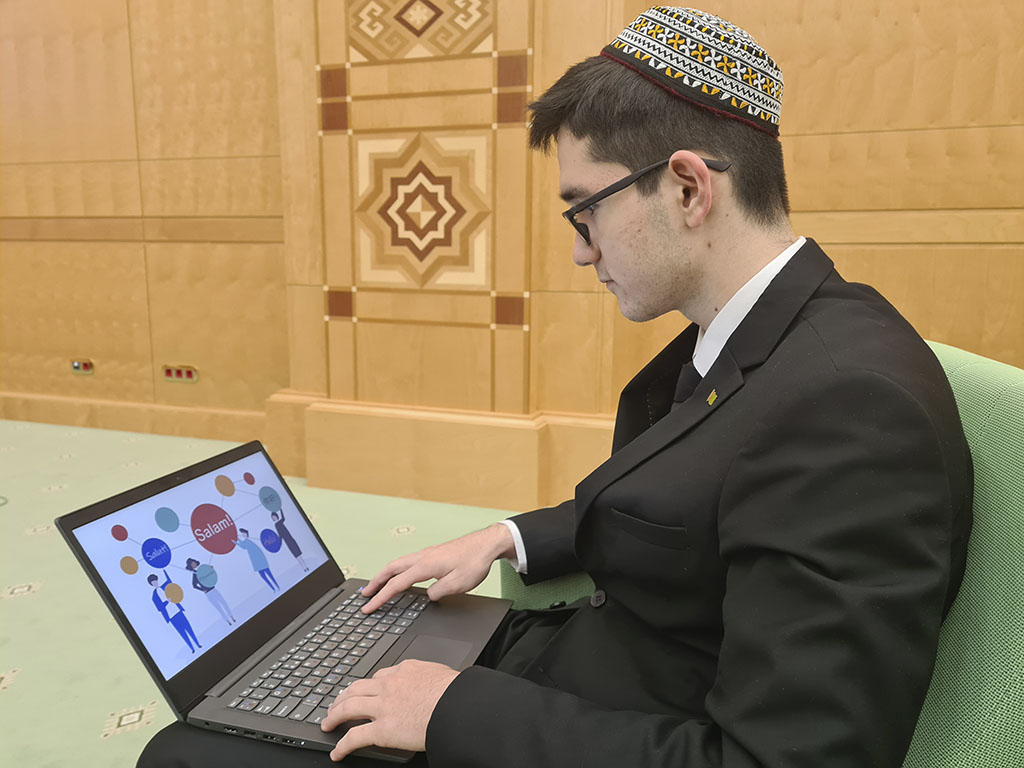 As for gender, in general, among all the winners of the competition, a little more than 14% were representatives of the beautiful half of our society, and among those who took first places, their share was already higher - 28.5%.

But the main thing is not in statistics, but in the fact that the young generation is given the opportunity to realize themselves in the IT industry, where it finds a way out of that digital energy that excites their heads.

The aforementioned Pena Sukhanberdyev, who is also an employee of the digital economy development department of the “Turkmen Telecom” agency, continues his thought:

– It is very valuable that the level of professionalism of the authors of the projects has significantly increased. And it is progressively progressing from year to year. Among those submitted to the competition "Digital Solution-2021" there are many such developments that can already be introduced into production, into their practical application. So digital Turkmenistan has prospects ... 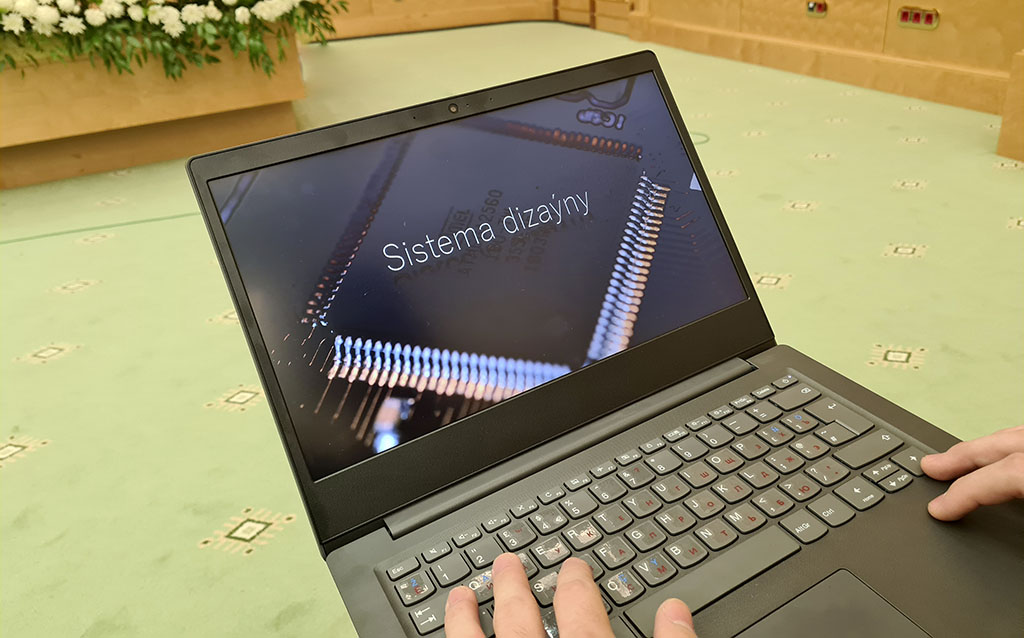